Tips-How to stay safe in Sofia

There are no required vaccinations for visiting Bulgaria. Most of the places which sell food are safe and food poisoning is extremely rare. Tap water is safe to drink almost everywhere.

The national currency is Bulgarian Lev (BGN), or Leva (plural) one lev is made up of 100 ‘stotinki’.

Where can you exchange money?

NEVER change money with anyone who stops you in the street, offering a better rate!

There are many exchange bureaus  which must display clearly exchange rates on large tables, with the sign “No Commission  and also in banks where you can exchange money.

The rate Euro – lev is fixed! The exchange rate to the € is fixed and never changes. One € is 1.96 leva. The USD and other currencies are exchanged using cross-reference rate based on the €.

Cash machines are also easily accessible in Sofia and larger towns. You can get up to 400 BGN at a time from one cash machine

All major European, North American and Japanese debit and credit cards are accepted. Airports and hotels also offer money exchange, but they usually tend to give less favorable rates.

Although money exchange scams are not as common as they were before, we would advise you to exchange money only in reputable places.

Road  traffic in Sofia is a bit hectic.The population is growing, so are the vehicles.  Many drivers don’t follow traffic rules, drive too fast, don’t wait for the pedestrians and won’t stop even on a zebra crossing. It’s always wise to have a look for fast driving vehicles before crossing the street.

If you are driving a car or bike here you may need some time to get used to the aggressive driving of many, to the quite popular breaking of traffic rules, and to the swearing of other drivers. The situation is worse for 2-wheelers and especially for bicyclers because the drivers are not used to them, often don’t see them or don’t consider them as equal participants in the traffic. So be extra careful!.

Taxis in Sofia are yellow, the only company with green cars is Green taxi. Here are a lot of fake taxis that imitate the logos and names of the legal ones , just by changing only one letter or word of its name, but trying to make it look the same.

The best way to be sure that you take legal taxi is to order it  by phone.

If you have to take a taxi from the street, be careful it is not one of the fake ones. Before getting into a taxi make sure it is a legal one.

Remember always to check the prices and the name of the company before entering the car!

Especially when you take taxi from Sofia Airport to the city center, make sure that you order it from the official booth of O.K. SuperTrans Company, available at the Arrivals.

There are many cases when taxi drivers overcharge unwary travelers, particularly at Sofia Airport and the Central Train Station. We recommend travelers use taxis with meters and clearly marked rates displayed on a sticker on the passenger side of the windshield.

Since 2013 the official taxi rates increased as the average price per kilometer per day is 0.79 lev.

Here is a list of Taxi companies officially approved by the Sofia Municipality:

The Sofia Metropolitan  is the rapid transit system in Sofia. It began operation in 1998. As of May 2015, the Sofia Metro consists of two interconnected lines, serving 34 stations, with a total route length of 38.6 kilometres  being among the top 30 of the most extnsive European metro system. The Metro links the populated districts of Lulin complex and Mladost ( Line 1 – Red) and  Nadejda – Lozenetz  (Line 2 – Blue). And since  April 2015, Line 1 started servecing Sofia airport – terminal 2. 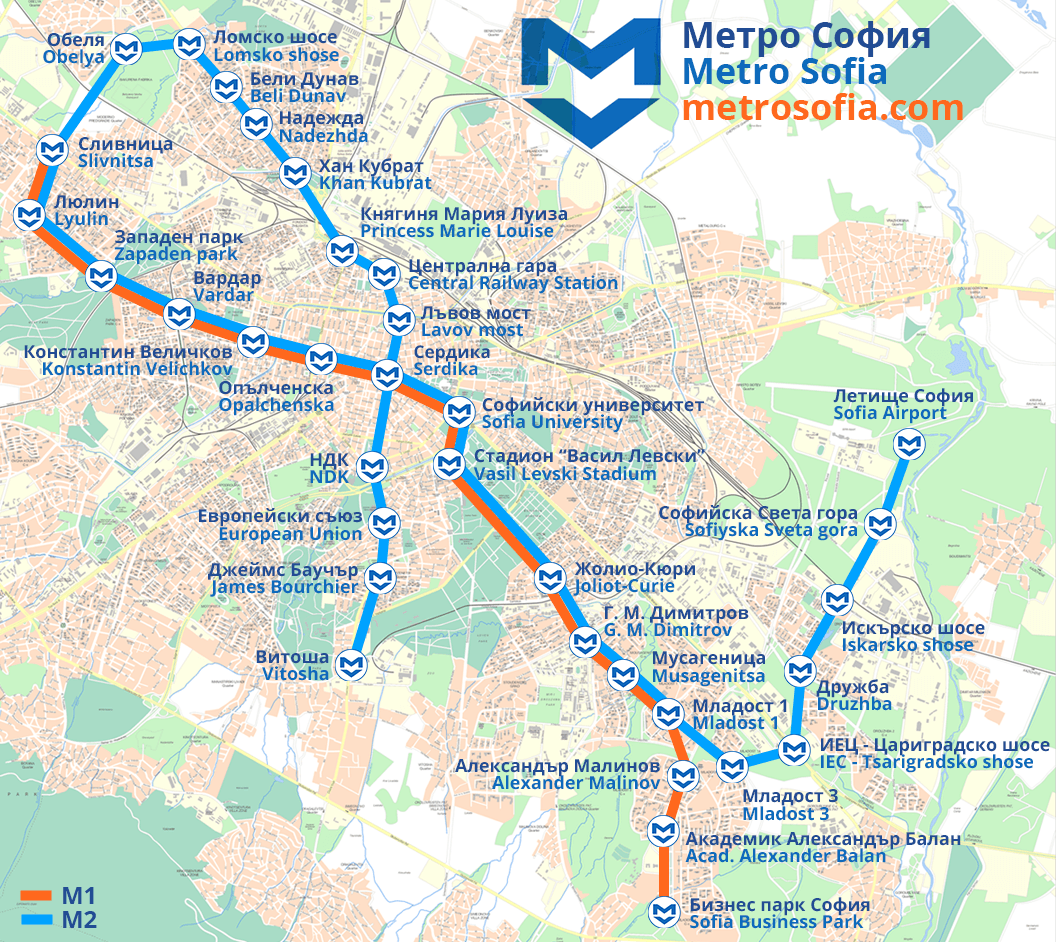 Sofia is in general a peaceful city .No cases of violence have not been reported. However, at  daytime the pickpockets can steal your purse or pocket with money in a very discreet way, so that you may notice after few hours.

Try  to avoid the following places;

We would advise to carry all valuables close to your body, or leave them in a hotel safe. If you use the public transportation, be extremely cautious, because pickpockets are very active there. They usually hang around in the places most popular with foreigners. Be careful if a group of well-dressed women crowd you in the street. They often are Roma pickpockets.

Reporting a crime immediately to the police has helped recover money and valuables on more than one occasion and is recommended.

Travelers should pay special attention to the drink prices in  bars and nightclubs. There have been instances of travelers being charged exorbitant prices, especially for champagne and hard alcohol. Bills have been as high as several thousand dollars for drinks, and in some establishments the management may use force to secure payment

If you rent a car, make sure not to leave any valuables in sight when you park. Break-ins of vehicles are frequent in Sofia, as is vehicle theft, and vehicles are rarely recovered once they are stolen.

Break-ins at residential apartments occur as frequently as in major cities everywhere. Persons who plan to reside in Bulgaria on a long-term basis should take measures to protect their dwellings. Long-term residents should consider installation of window grilles, steel doors with well-functioning locks, and an alarm system that alerts an armed response team.

Beggars in Bulgaria are mostly located in the big cities – in the city centers, around stations, hotels and markets.  Arrogance is rare – most beggars will just stay in some place with outstretched hand or a hat/cup and possibly say something to invite you. Some beggars (especially children) may come in or around bars and try to beg next to the tables.

It’s up to you whether to give to beggars or not. But you should know that most of these people are making good money this way and are there by choice. Kids are often controlled by gangs and sometimes are intentionally crippled to cause compassion.

There is some risk for you when dealing with beggars – they sometimes act together with pickpockets and other criminals and begging is just a test to see how much cash you have and where you keep it. So, be careful!

If you are interested in such services you should have in mind the risks. They are not illegal but you never know when you can break some law on the side – for example you can be offered an under-aged prostitute, corrupted cops may appear suddenly and pretend you are doing something illegal, or you can be robbed in a dishonest game-room.

This website uses cookies to improve your experience. We'll assume you're ok with this, but you can opt-out if you wish.Приемам Отказ Прочети повече
Политика за поверителност и бисквитки