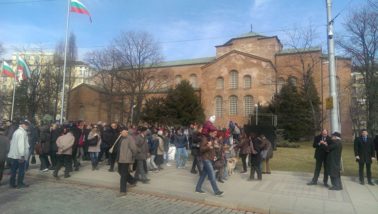 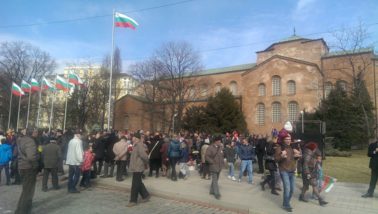 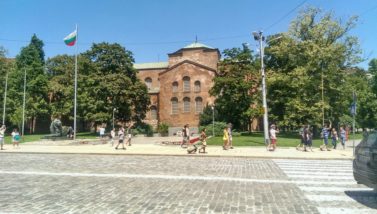 The Saint Sofia Church is the second oldest church in Sofia dating back to the 6th century.

In the predecessor building took place the Council of Serdica held most probably in 343 and attended by 316 bishops.

In the 14th century, the church gave its name to the city, previously known as Sredets.

The church of St. Sofia was built on the place of the necropolis of the city of Serdika (the old name of Sofia) and other older churches from the 4th century and dozens of masonry tombs. Fragments of the mosaic of one of the older temples were found during archaeological excavations. It is considered that the building can house up to 5 thousand people.

In the 16th century during the Ottoman Dominion the temple was reconstructed into a mosque, and its wall paintings were destroyed.

According to a legend, in the 16th century the goldsmith Georgi was burned alive in front of it, because he refused to convert into Islam. The great earthquakes in 1818 and 1858 demolished the minaret and destroyed the building, and according to a legend during the second earthquake the two sons of the imam were in the building and died. The Muslims considered that a bad omen and deserted the temple. It was deserted for a long time, but after the Liberation (1878) it was turned into a warehouse.

The most significant reconstruction works on the temple started at the beginning of the last century and were completed in 1936, with functions and service renewed in 1930.

It is believed that this is the first ever restored archeological monument in Sofia. The most recent conservations and renovations though ended only 12 years ago. They brought back the grandeur of this ancient temple in the shape we see it now – a beautiful antique gem of spiritual nature, surrounded by greenery and peaceful ambiance in the administrative center of Sofia.

The St Sofia Church stands in the middle of an ancient cemetery with many tombs under and near it. Some of these have been uncovered and will hopefully be conserved so that we can see the beautiful wall frescoes and the stone sarcophagi.

The present building of the church itself has the shape of a cross basilica.

During the numerous reconstructions and transformations the church architecture has undergone many changes but modern architects have done their best to restore the main features. One of these is the beautiful window array which provides the grace and lightness of the façade as well as the lighting inside.

The legend tells that a princess named Sofia arrived to the city. She was sick but eventually healed, recovered and then built the church as a sign of gratitude and praise of God.

When she died she was buried in it.

You can read also about the National Assembly.